An EU-wide job guarantee would be a counter-cyclical measure to tackle the health, employment and ecological crises together.

With a cascade of global crises wreaking havoc on our fragile economies, additional expenditure on a job guarantee for the unemployed might seem an extravagance. Are not public health and a just energy transition the priorities now?

Yet as Kim Stanley Robinson puts it, ‘on a warming, carbon-clogged planet there is always more work to be done’. Indeed, the need for work will only grow if we are to sustain even the current level of civilisational development. In a United States context, Robinson points to seven-digit unemployment amid the coronavirus crisis and the proposal for a healthcare public-jobs corps to absorb 100,000 workers.

Consider how infrastructure was previously built in the US. The rapid creation of the most fundamental infrastructure that serves to this day—from schools, hospitals and bridges to post offices and museums—was possible thanks to the Work Progress Administration in the 1930s.

In the few years of its existence, the agency managed to create 40,000 new buildings and refurbish another 85,000—not to mention the fantastic cultural offer of theatre, art and music which allowed American culture to blossom and later expand globally. Overall, the agency helped 8.5 million people in times of economic downfall and war.

Pope Francis’ unequivocal support for a ‘universal basic wage’, which would acknowledge ‘noble, essential tasks’, comes from his grassroots work in Argentina with the cartoneros (litter pickers and recyclers) employed by Plan Jefes. When unemployment peaked at 25 per cent in May 2002, the government stepped in and directly financed jobs, in collaboration with local governments and non-governmental organisations. It is another effective example of how to think about unemployment together with other social and public-health challenges.

Behind such empirical proof of concept, the idea of a job guarantee is rooted in economic theory. Our understanding of a public institution as an ‘employer of last resort’ dates back to the contributions by John Maynard Keynes and Michal Kalecki on the nature of capitalist crises and development. Their focus was on how unemployment was a constant concomitant of the private sector acting conservatively with regards to investment—for example in Keynes’ notion of capitalists’ ‘liquidity preference’.

But modern scholars take this further and the latest book from Pavlina Tcherneva presents a sound economic foundation for a modern-day job guarantee programme. A job guarantee would smooth the business cycle and reduce the huge economic and social toll of the crises we now observe with almost decennial regularity. Its counter-cyclical features would not only make for flexible changes in public spending, stabilising employment at a high level, but buffer shocks to employers as well.

A job guarantee would effectively set a wage floor: anyone with worse remuneration would switch to enjoy the programme, thus introducing a non-bureaucratic minimum wage. In a world where wage growth has become disconnected from productivity gains—approaching 70 per cent of gross domestic product in the 1970s but falling to little over 50 per cent in most EU countries today (see figure)—the employer of last resort becomes the greatest friend of the working class. 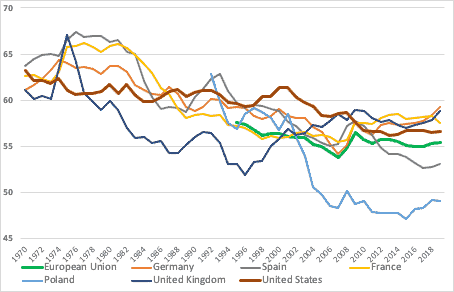 With this self-targeting, such a programme would allow members of minorities and other excluded groups to reach out and actively seek aid, thus reducing reliance on informal, mostly unprotected relationships in the shadow economy. Finally, a job guarantee is no charity—rather, dignifying and empowering the individual to regain stability as a productive member of the community.

The connection between the two crises immediately before us, of public health and mass unemployment, is no coincidence. Unemployment has plagued parts of Europe since the great recession and is becoming more acute as a result of Covid-19. At the same time, public services, especially in health and social care, are understaffed and underfunded.

Although the opposite argument often appears in talks with officials in Brussels, guaranteeing the right to employment and the right to health is inherently the EU’s responsibility. Unemployment is a fundamental and often ignored social determinant of health—as indeed are environmental neglect and devastation.

The European Commission is charged with reporting on the European Pillar of Social Rights, as part of its Joint Employment Report (JER) with the European Council mandated by article 148 of the Treaty on the Functioning of the European Union. Moreover, article 122 provides a legal basis for the council to implement appropriate measures in the event of serious difficulties and disasters beyond national control. Any fiscal move is deemed appropriate, really, when lives are at stake.

The existing Youth Guarantee programme could be the legal framework allowing for a decisive move towards employing the unemployed to fill gaps in public services. It has proved efficient as a pilot but it is too small and poorly funded for the challenge before us.

An EU job guarantee could, uniquely, tackle together the triple threat of unemployment, public-health deficits and environmental neglect. Its counter-cyclical features render it the ideal instrument for all economic weathers—being put to use only when necessary and then automatically.

The EU is already spending hefty budgets on addressing each of these problems. It suffers from medical deserts and environmental blight. Now it needs to connect the dots. Employing the unemployed to address public-health and environmental challenges means relieving pressures on pre-existing expenditures.

This could be done by expanding the Youth Guarantee. But we need to do a lot more and to rework its funding mechanism. And the countries which suffer a disproportionate share of the burden of these problems are also those with the least fiscal headroom.

These discrepancies were already all too evident in the explosion of migration after the eastern EU enlargement. Over 2.5 million people left Poland alone, in search of better wages and conditions in richer countries. No wonder: a registered nurse in Germany enjoys a monthly wage of almost €2,500, twice that in Poland.

Any country leaving recession sluggishly will be hit by such consequences, leading to major underdevelopment in the medium to long term. Instead of moving people to jobs in better-off regions of Europe, we need a sustainable programme of creating jobs where they are needed.

Thus, a job guarantee becomes a structural development instrument which boosts employment in disadvantaged regions. If we are to bridge the gaps, such a common fiscal mechanism for the EU is needed.